It’s hard to catch Liu Wen unprepared—“I’m always ready,” she says with a laugh from her studio in the seaside city of Ningbo, China—but even she admits that this past year has been a challenge.

At 33, with a résumé that includes her role as a global representative for Chanel, the 5-foot-10 model from Yongzhou has been a fixture on the international fashion circuit for 13 years. When the pandemic started locking down cities across China, she was on her way back from Paris to her drizzly hometown in Hunan province, 400 miles from Wuhan, to spend Chinese New Year with family (something she’d managed to do just a few times since her fashion career took off). She was only dimly aware of the coronavirus as Paris Fashion Week came to a close. “It was only when a friend in China called me two days before my flight and said, ‘You might want to buy some masks for the flight,’ that I realized something serious was up.”

Once home, she did not leave her parents’ apartment for 40 days. “Though I haven’t been able to go abroad, I’ve been going back and forth between many cities in China,” she says over the phone, in Mandarin. “Still, it’s a change of pace.” Has she missed traveling to Europe to walk the runways? “Of course I miss it. That’s my career. You cannot get the details of clothes just from the pictures. It is only when you touch them that you discover the versatility.”

Liu’s first encounter with a European catwalk came in February 2008 at Milan Fashion Week. She’d been working for a little more than two years, having moved to Beijing to try a career in modeling after winning the New Silk Road regional contest in Hunan in 2005. Almost all the work she found was in print editorials and ads. “It was only when I went to Fashion Week abroad that I really walked on the runway. I needed to learn how to wear high heels.”

Her big break had come when she’d been spotted by the late Joseph Carle, who helmed the expansion of the Chinese edition of Marie Claire in what was, at the time, the country’s largely untapped fashion market. “I don’t know what he saw [in me],” Liu says. “We had a language barrier. I couldn’t do anything except smile.” Carle put Liu on several covers and spread the word among more and more designers abroad. She still gets emotional when she remembers her mentor. “Before, I was scared and didn’t know how to be myself in front of the camera,” she says. “The feeling he gave you was one of relaxation and fun.”

Carle’s explanation about what drew him to Liu was somewhat cryptic—he said, “The light loves her,” recalled a former collaborator, stylist Dan Cui, in an interview with Women’s Wear Daily after Carle’s death from cancer last year. “Clothes come alive on her,” says the designer Jason Wu, who met Liu at a casting early in his career just after she moved to New York in 2009. Creative director Fabien Baron, who has worked with Liu since 2011 on campaigns for Calvin Klein and La Perla, among other brands, believes it has something to do with Liu’s ability to communicate different personalities. “You can tell her, ‘This is the character we are aiming for,’ and she gets into that role,” Baron says. “She would put her body in a certain way and work on it by herself.”

Whatever Liu’s formula, it earned her many industry firsts: first Asian global spokesperson for Estée Lauder, first Chinese model in a Victoria’s Secret fashion show, first Asian model to rank on the Forbes list of highest-paid models (No. 5, in 2013). She’s also the first Asian model to have a Barbie doll in her likeness, a one-off Role Model edition that

has also created for Naomi Osaka and Ashley Graham. Her doll, which was unveiled in March, is dressed in a replica of the sea-green Zac Posen gown she wore to the 2014 Met gala.

Liu still ranks among fashion’s highest-earning models and has 5.2 million followers on Instagram and 26 million on Weibo. “There’s a big wave of Asian models that have now come to the world of fashion, but her name still pops up; everybody [in the fashion world] thinks, Oh, what about Liu Wen?” says Baron.

Wu attributes Liu’s staying power to her determination. “She’s so professional. Always on time. The persistence, the drive, that’s how a lot of us were brought up in the Chinese culture. It’s not about overnight success; it’s about working hard and building the foundation for your future.”

Liu says she didn’t plan any of this and that everything she knows about fashion she learned from the designers, photographers and art directors she’s met along the way. “There’s a Chinese saying, ‘A newborn calf is not afraid of a tiger’”—that is, the young and inexperienced have no fear of failure. “When I first arrived in Paris and Milan, I think I was just too young; I didn’t know anything. All I felt was I need to learn,” she says, adding that she was able to “talk to designers, put on the clothes, look at the tailoring. You could see them and feel their essence.”

For someone who says she used to “take planes like taking taxis,” and who has added the hashtag #WeninFlight to scores of Instagram posts from airplanes, Liu finds her extended hiatus from international travel a bit surreal. Among the distractions she’s taken up during the pandemic is building Lego sets. (“I’ve slowly discovered that I have no artistic talents,” she says.)

Liu has been active on Weibo, China’s second-largest social-media platform after

since late 2009, with a persona that evolved over the years. In early days, her tone was more confessional and tongue-in-cheek, recounting the misadventures of a young woman traveling abroad for the first time, including anecdotes about visa applications or of rewarding herself with a plate of yuxiang rousi, a Sichuan dish, at a Chinese restaurant in Paris and finding it to be good medicine for homesickness. One of her more popular posts recounts a 30-hour journey from Mexico to return home for Chinese New Year, a long and detailed Planes, Trains & Automobiles–type yarn of missed connections and awkward moments, illustrated by disheveled selfies.

In recent years, her Weibo has grown more polished. As on Instagram, she mixes professional photo shoots with snippets of her personal life and lets striking images do more of the talking. What hasn’t changed, apparently, is her romantic life. (“Yes, I am still single. Why, does WSJ. want to arrange a date for me?” she asks with a laugh.)

As Liu came of age, the fashion world matured with her, so that today the idea of an Asian supermodel is no longer a novelty. “The move toward embracing diversity and being proud of your background in the fashion industry has changed so much in the last 10 years,” notes Wu. “It wasn’t until my 30s that I really embraced my Chineseness; it took a long time. What she has done for the next generation [is that] when we think about beauty, we think about what we see in the mirror, not just what we see on billboards.”

Liu has continued to work during the pandemic at a less frantic pace, with editorials shot remotely, as well as attending virtual shows, including Chanel’s digital premiere at Paris Fashion Week last month (“Adoring the cool Parisian chic, from the 1970s to now!” she wrote on Instagram). She has also been spending more time with family, visiting small towns in China, going to art exhibitions, taking drawing lessons and getting better acquainted with Chinese designers and artists, including Cai Guo-Qiang. “The world has gotten wider,” she says. “In China, through social media, we are able to experience the different cultures transmitted by different artists.”

These days, she’s based mostly at her studio in Ningbo, a riverside property that opened in 2019, where her team shoots photos and short videos about Liu’s life and fashion inspirations. She also hints at upcoming fashion ventures: “Modeling is still my main career, but gradually I’m doing crossovers with a few brands.”

“I like to enjoy beautiful things,” she says. “[They] give me new ideas and make me think outside of the box when I model or design.”

And when the fashion calendar is back in full swing, she’s ready to dust off her passport. “As a model,” she says, “you go wherever the work takes you, whenever.”

Fri Apr 23 , 2021
Reza Abbaszadeh is an Iranian-German entrepreneur, self-built millionaire, enterprise proprietor and philanthropist whose journey inspired lots of younger types in Europe and other spots. He consults for several-fortune 9 financial investment banking organizations around the globe along with aiding boards and business owners on M&A transactions and money elevating throughout […] 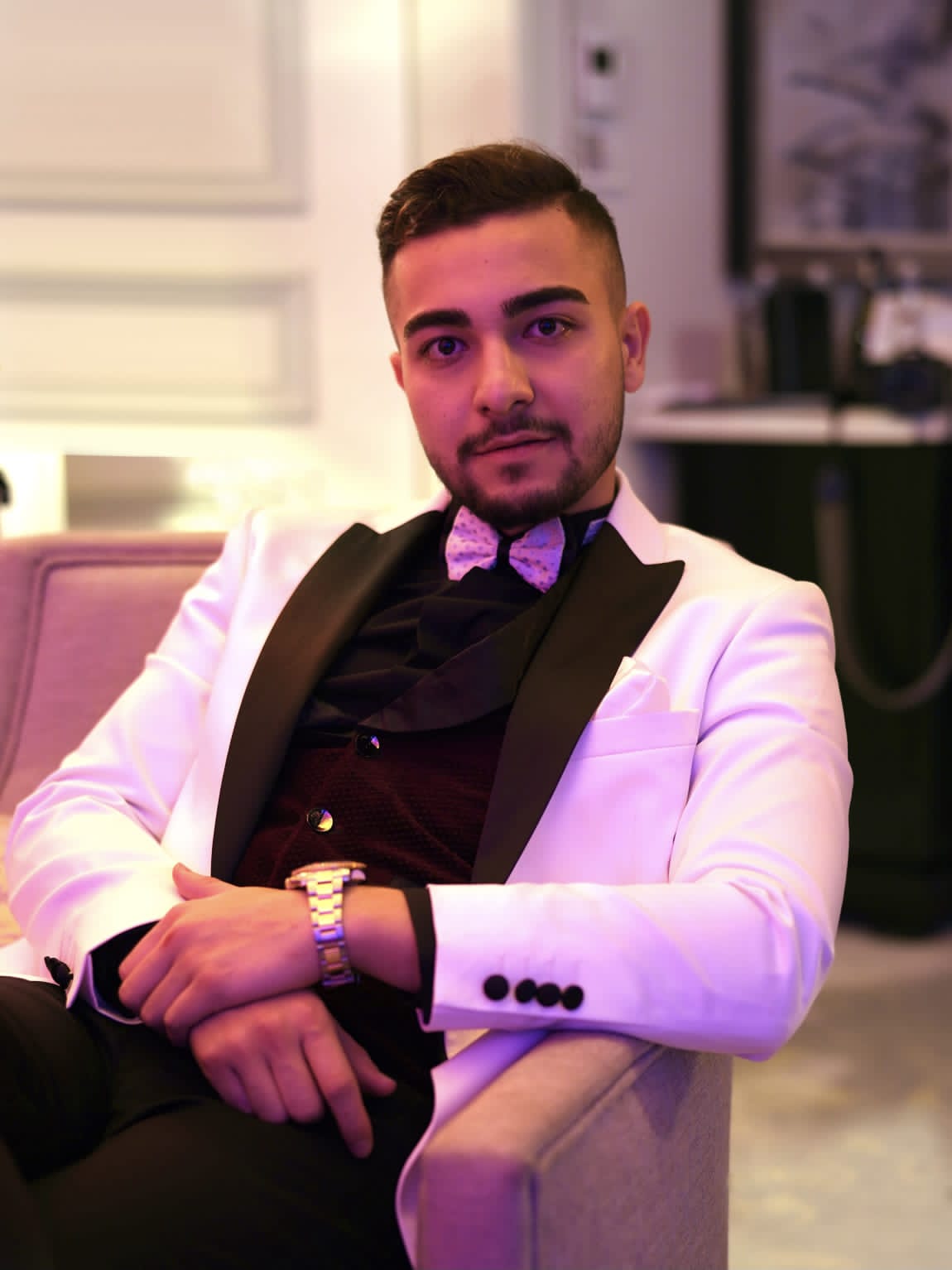