There are not too many TV series full of nerve-wracking scenes like Game of Thrones. Here are the most uncomfortable scenes in a rewatch.

There are not too many TV series as thrilling, unpredictable, and full of nerve-wracking scenes like Game of Thrones. One could say that there were way fewer moments of somewhat peaceful story arcs than there were anxiety-inducing ones. In Westeros, most fans expected the death of at least one main character in every episode or even a surprising slaughter coming out of nowhere.

Throughout this intense show, countless scenes made viewers extremely nervous while feeling the anticipation of a terrible end – either on a confrontation, battle, or wedding gone wrong. Audiences got used to plot twists that shocked everyone but these scenes below stand out as the most daunting. Warning: mature and dark themes will appear ahead.

10 Jaime Pushing Bran From The Tower

At the beginning of the series, Jaime pushed 8-year-old Bran off the tower and this set him up as a character to dislike. Especially because of the reason behind this cruel act: to keep his incestuous relationship with his sister Cersei a secret, after the child glimpsed some disturbing images. While the scene itself is hideous to watch, its impact wouldn’t be such if the fans didn’t know what was the terrible fate of the boy (and how it’s changed the narrative of the story). His coma and subsequent paralyzation transformed GOT‘s tale forever. This act of violence led to the start of a war between House Stark and House Lannister.

During season 4, people felt justice was made when they watched Tywin being murdered as he was considered by many the cruelest Lannister of them all. But because this assassination was carried out by his son Tyrion (falsely accused of murdering King Joffrey and disappointed by his father’s lack of interest to fight for his life), this scene is absolutely nerve-wracking to watch. All the suspense and conflicting emotions involved are heartbreaking. The way he carried out this killing, taking Joffrey’s crossbow from the wall and doing it while his father was sitting on the privy are details of an even more disturbing moment. As people know, this was a dramatic turning point in the story.

This was a scene that had fans cowering behind their hands. One could argue that Ned Stark’s execution was a pivotal event in the rising conflict caused by the death of Robert Baratheon. After it, the audience learned that Game of Thrones was not some derivative fantasy series and it could very well chop off fan-favorite characters easily. It’s super intense to rewatch this moment as it was filled with a tone of doom and pessimism.

RELATED: Game Of Thrones: 5 Ways Sansa Was The Best Stark (& 5 Ways Arya Was)

Plus, fans witnessed Ned beheaded in front of his daughters Sansa and Arya Stark – which is absolutely brutal. At the time, little did fans know that his death would have lasting implications on the series.

The way Arya managed to kill the Night King left many viewers asking questions at the time. While it was certainly a dramatic scene that no one saw coming the way it did, her heroic act was a spectacular move that, in the end, made total sense. The Night King only realized her reveal at the last second and he didn’t anticipate that the knife would actually kill him because he just stood there watching it get plunged into his torso. But Arya’s valyrian steel dagger made the deal in a highly intense confrontation between these two characters. No die-hard fan will ever forget this climactic moment set at the end of a terrifying battle.

The so-called controversial “Purple Wedding” was the set where King Joffrey’s death was turned into a show to remember. Hardly anyone forgets how his sudden death by poisoning was dramatic, to say the least. Even though Joffrey was one of those characters that people loved to hate, watching this powerful and maniac king choking to death while bleeding from his nose and eyes was beyond disturbing. But by then viewers knew that GOT was a show that relished in its gore, violence, and brutal deaths, so this dark scene was just another one to the pile.

Few scenes were as visually horrendous, dreadful, and extremely graphical as the Red Wedding. Perhaps it is the most famous sequence of the show precisely because of its emotionally draining and heartbreaking shots. This scene was basically a massacre of several fan-favorite characters and it was even worse because it was done in the middle of a ceremony of love and union.

Close to the end of season 3, the audience witnessed one of the most jaw-dropping ten minutes of television caused by House Frey’s betrayal of the Stark family. It is incredibly brutal and it can definitely be hard to rewatch.

4 The Assassination Of Jon Snow

Yet another shocking “death” of a popular character was at the end of season 5, with the presumed killing of Jon Snow. The GOT series was always making sure that fans remembered that no character was safe – even the main protagonists. The bastard-turned-hero-and-king of the show was let down by his Night’s Watch brothers after he saved the wildlings. He was sadly ambushed by his men and stabbed to death. This was one of the most frightening scenes and fans only got a proper rest from this worry when the Red Woman came to Jon’s rescue.

3 The Battle Of Winterfell

When Daenerys put her conquest of the Seven Kingdoms in second place on her priorities to travel North and defend the realm, fans knew that an apocalyptic battle was coming. Destroying the White Walkers almost seemed an impossible mission and viewers had been anticipating this fight for a few seasons. As the time came to face the enemies, the longest battle ever that included a massive cast left viewers speechless by its visual spectacle and production value involved. With the help of Drogon and almost every major character of the show who was running to win the Iron Throne, everyone bond together to defeat the army of the dead. A historical scene that was as nail-biting as it could be!

Queen Daenerys’ death came too fast as many fans felt that her sudden switch from hero to villain should have been developed over time. Jon Snow and her beloved final scene together was, indeed, heartbreaking as he was forced to kill her even though his feelings were strong. The true hero of this show pushed himself to act in the name of justice, going against his love and future plans together. Yet, rewatching this moment is incredibly painful for anyone who followed the saga as it marked the end of a long journey towards a better future/kingdom that was now completely hopeless.

Deaths, battles, or combats could be fairly common in many ancient civilizations in the old times. But some crimes were just as atrocious then as they are now. Seeing an innocent young lady like Lady Sansa being raped by a monstrous man was beyond tragic. Even worse was the fact that she already had had terrible luck in life with all that she had witnessed and all of what her family had to go through. So, when she was forced to marry Ramsay Bolton viewers already hated him for the despicable torture he made Theon suffer. Naturally, everyone cringed when they saw poor Sansa being raped soon after the ceremony ended. A disgusting act that no one could be indifferent to if they had to rewatch it!

Soraia Ferreira is a self-called Dreamer Virgo Artist. She has always been fascinated with films and stories, especially writing and producing them. Both her creativity and her too “freaky” organizational skills have greatly supported her work as a TV/Digital/Media Content Producer for more than 10 years.

At heart, Soraia is a storyteller that has learned to shape her talent into various platforms and different communication channels (offline and online media).

She believes Art represents a huge spectrum of life’s expressions and exploring its many forms is a continuing process of learning about the world and us individually. So, she likes to think that she is a “dreamer” because she looks for fulfilling her heart’s passions while also being a great “doer” and turning those passions into concrete solid action steps like a disciplined Virgo. So, here it is: a Dreamer Virgo Artist!

Thu Mar 18 , 2021
JUST FOR KICKS Bast (sporting Isabel Marant) seems to be on as Anubis, sporting a Manchester United jersey, will make a quick pass to Who.  Image: Illustration by Alejandro Cardenas Kristina O’Neill March 12, 2021 8:42 am ET Ending baby hunger in the midst of a pandemic is not a […] 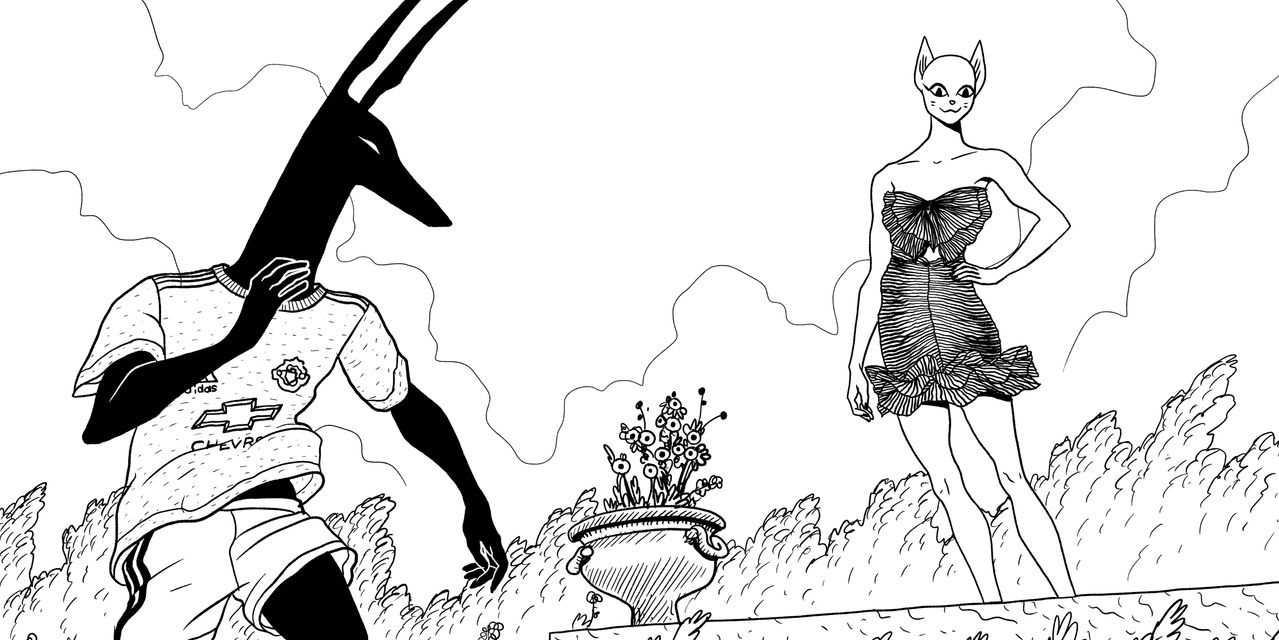